City government holds many meetings – but they have never been run like this.

For specific amounts of time, the city of Sioux Falls’ department heads first give updates on previously set goals.

From there, the group of 12 plus Mayor Paul TenHaken takes an approach called “IDS” with any potential issues that arise – identify, discuss and solve.

“When I started, our leadership meetings were basically round tables,” said TenHaken, who became mayor in 2018. “People gave updates, but it didn’t feel like a team or collegial. It felt like everyone was individually focused on their department. So I thought, let’s use this private sector concept of EOS in a government setting.”

EOS – or the Entrepreneurial Operating System – is a simple but powerful set of concepts and tools increasingly used by entrepreneurs and businesses of all sizes to systematically and permanently improve.

It’s a focus of the newly rescheduled annual conference of the Prairie Family Business Association, which will be a hybrid event with a limited number of in-person seats and a complete virtual conference option.

The conference will be Sept. 10 and 11 at the Hilton Garden Inn Downtown in Sioux Falls. It’s open to all family business and will offer content for all sizes of family business. The virtual conference is opening the opportunity to expand the audience both regionally and nationally. Engagement with fellow family businesses will be a key feature of this year’s conference.

It will feature Mike Paton, EOS expert and best-selling author, who will speak about six keys to getting what you want from your entrepreneurial company, followed by a panel of business leaders discussing how they have put EOS to work for them.

“Family businesses who choose to implement EOS, either through an adviser or through self-implementation, see significant positive changes because of it,” said Stephanie Larscheid, executive director of the Prairie Family Business Association.

“EOS tools have helped families stay true to their operating system and their core values throughout the pandemic.”

TenHaken discovered EOS while serving as CEO of Click Rain, the marketing technology business he founded in 2008.

“One of my partners introduced EOS to us, and I was a little skeptical as most businesses are because you think you’re efficient already,” he said. “And you don’t realize how inefficiently you’re setting goals and dealing with issues until you get into a regimented system like EOS. It was transformational for us at Click Rain.”

So he adapted the process for city government, a much larger organization, and has seen similar effects. Goals are set with one-, two- or three-year deadlines with milestones broken into 90-day chunks. They are shared and collaborated on among city departments and worked on during those restructured leadership meetings.

“The group helps solve challenges. Before, if someone had an issue, it was the department and the mayor to figure it out. Now, we have 11 other minds in the room,” TenHaken said.

In any given quarter, the team might identify 50 priorities for the city and decide collectively which require the most focus.

The same approach is being driven down into departments, TenHaken said.

“And we’re all using the same language, so it’s created a universal framework, and we can all speak the same talk,” he said.

“I’ve seen this system work at a $5 million company and a $500 million organization, and, granted, we’ve had to pivot a little bit and get creative in a public environment, but this process helps you clearly delineate what to focus on. It helps you determine if the right people are in the right seats to get the work done and helps you accomplish the goals.”

Moffatt Products has seen it work too.

The Watertown-based manufacturer learned about the process at a Prairie Family Business Association event from other members. The family bought the book “Traction,” which details the approach, “and read through it twice and then felt comfortable enough to entertain the idea,” general manager Mark Moffatt said.

“On the first pass through, it sounded so foreign to how we were running the business day to day that we weren’t really sure if we should trust it or steer our business in that direction.”

That was in 2015, and after about 18 months of consideration, they reached out to a professional implementer for advice, and the business determined it could be a fit.

“We were hoping for a tool that would allow us to shift from being a family business where the owner or family tends to make the decisions and usually no one else is brought into the loop,” Moffatt said. “Our main goal was open and honest communication with the leadership team that would lead to shared decision-making.”

Two years into implementation, his seven-person leadership team is adjusted to structured, regular meetings and the types of issues they’re meant to resolve, he said.

“It’s clear what each team member is working on and painfully clear each week whether progress has been made,” Moffatt said. “There’s nowhere to hide. It’s an accountability system. As a result, documenting our core processes, our sales and quoting process has gotten much better, and this year we have produced three times more sales in the quote funnel than any time in the history of the business, and I think that’s largely due to EOS. It’s tuning out the noise, and I think it’s showing results.”

His team now is more comfortable tackling issues together that used to be hallway conversations or private meetings, he added. Trust has grown even more than the company already enjoyed, he said

“I am so grateful that we had EOS in place when the pandemic started to impact our business this spring,” he added. “Our regular EOS-driven meetings gave us more consistency and helped us adapt to the changing circumstances more quickly and accurately than I think we could have otherwise been able to.”

He encourages other family business to consider implementation too.

“I think it’s great. I think there are a lot of businesses in the Prairie Family Business Association who would benefit from doing EOS or giving it a hard look. I’m excited to hear directly from someone with the EOS organization at the upcoming conference.  It might sound like a scary concept, and some of the language might make you nervous, but you’re not giving away control of your business. You’re actually gaining control.”

“We wanted to get started on the right foot with our fourth generation of the family business, and ‘Traction’ implemented with help seemed to be a good fit for us,” Chris Lidel said.

The Chester-based excavation company worked with a professional facilitator to implement the process, beginning with honing communication among leadership.

“That’s really the thing that resonated,” Lidel said. “We needed common goals. We needed to communicate them to our leadership team and hold each other accountable for tasks we say we’re going to do. Accountability is a big thing with ‘Traction,’ and that really was a big reason for us to pursue it.”

The 15-person leadership team plans to use its weekly meetings to enhance its approach to tackling goals, he said.

“Is it a be-all, end-all that will transform the world? No, but does it help? Absolutely. It’s not rocket science. It’s regular meetings and common goals and talking about issues, but to have a platform is great to get everybody on the same page. I think it might bring organization to a lot of businesses,” Lidel said, adding he plans to attend the upcoming Prairie Family Business conference to learn even more.

“I think Prairie Family Business is the most robust and insightful organization we belong to. I think I get the most out of it. I really appreciate being part of a peer group, and I think we’ll probably be talking about the EOS. We should because Prairie Family Business is going to be addressing it in the conference, and I think that’s a great thing.”

Elkton-based BankStar Financial is one of the oldest banks in Brookings County. Previously named Corn Exchange Bank, it’s a community bank that also has locations in Brookings and Volga and has a long history of family leadership.

Jack Hegerfeld recently retired from the board of directors and celebrated his 70th anniversary in business earlier this year. His son, Chuck Hegerfeld, serves as CEO.

Greg Fargen, president of the Brookings location, brought the concept to the bank a couple of  years ago. After reaching out to organizations that had used the process, the team decided it would be beneficial in numerous ways, said Amanda Lauer, vice president and the third generation of the business.

BankStar was looking for ways to identify and address issues, move forward at a faster pace on goals and improve communication throughout the organization, she said.

“I recently looked back at one of our first meetings and had to laugh at how long it took us to tackle the process of modifying our core values,” Lauer said. “We spent the entire day on this exercise before we all agreed to move forward with the changes.”

Early in 2020, the team took another look at the core values and made  changes they felt were more fitting for BankStar.

“That entire process took only about two hours,” she said. “We tend to forget about the progress that our organization has made over the past few years, but it is so important to celebrate those successes.”

Using a facilitator during the process also has helped BankStar move the process forward more efficiently and assisted with keeping employees on task and more accountable, she said.

“Because of this process, we have grown both internally and externally and emerged into a more unified organization,” Lauer said.

“It pushes you to elevate and delegate and gives you the systemization and structure to create a better culture among your team. Ultimately, the system helps you become a better leader.”

For a list of Prairie Family Business sponsors, including those who can help businesses implement EOS, please visit fambus.org/sponsors.

The Top 10 Takeaways from the 2020 Family Business Conference 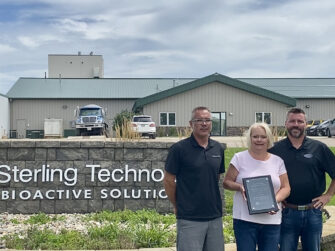 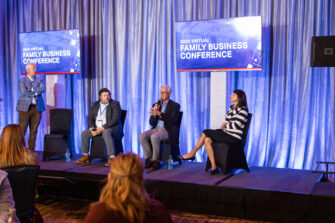 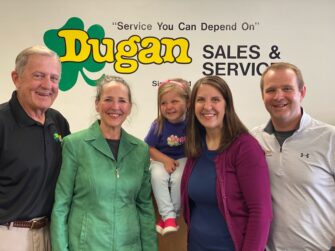 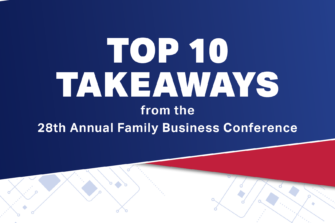 The Top 10 Takeaways from the 2020 Family Business Conference