Prairie Family Business Association hosted their 30th annual Family Business Hybrid Conference on April 28 and 29 both in-person at the Hilton Garden Inn Downtown Sioux Falls and virtually for attendees from 20 states and a record attendance of over 500 people.

The Heritage Award recognizes a family business that was founded more than 75 years ago, and it was presented to the Nelson family of Nelson & Nelson CPAs, headquartered in Sioux Falls. Nelson & Nelson CPAs is in their 99th year of business and is the oldest CPA firm in the State of South Dakota. Third-generation owner Chuck Nelson accepted the award along with his spouse, Kristine, and daughter, Jill Nelson, who is fourth generation. The Nelson family is a founding member of the Prairie Family Business Association.

The Bender family of Falcon Plastics, headquartered in Brookings, South Dakota, was presented the prestigious 2022 Vicki Clarke Family Business of the Year Award, which is given in memory of Vicki Clarke, a former advisory board member of the Prairie Family Business Association and part of the County Fair Food Stores family. Accepting the award was second-generation owners Jay Bender and Guy Bender and third-generation leaders Jenn Barlund and Kyle Bender. The late Vicki Clarke’s son, Steve, and his spouse, Whitney, of County Fair Food Stores, presented the award to the Bender family. The Bender family is a founding member of the Prairie Family Business Association.

Other highlights from the conference include the Taste of Family Business social event, which featured eight family businesses showcasing their food and beverage products. Tiffany Anderson, fourth generation of A-OX Welding Supply of Sioux Falls, received the inaugural Chief Promoter Award, which is given to the member who refers the greatest number of new members to the association.

Featured speakers at the conference included Dan Cathy, chairman of Chick-fil-A, John O’Leary, presenter of “The Power of One” and Mike Michalowicz, author of “Profit First.”

Plans are already underway for the 31st Annual Conference, scheduled for April 27-28, 2023.

The Prairie Family Business Association (PFBA), founded in 1992, is an outreach center of the University of South Dakota Beacom School of Business. PFBA helps family businesses thrive through generations by providing a resource network for family business success. The Association serves more than 230 members of businesses throughout the region and nation. 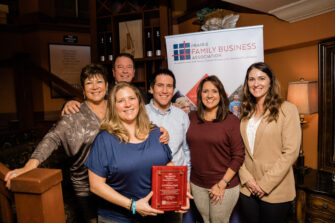