If you want to know what other CEOs will be doing in the years ahead, look at what Craig Larson is doing now.

“He’s such a futuristic person; he thinks way ahead of the game, and he thinks things out really well,” said his wife, Shelley, who also serves on the board of directors for their family-owned bank.

Larson is stepping away from his day-to-day role as CEO of Bismarck, North Dakota-based Starion Bank this month and has been planning for it for years.

But unlike most CEOs, who transition into a traditional board leadership role or exit entirely, Larson will be the new executive chairman of Starion Bank, which has 16 locations in North Dakota and Wisconsin.

“I’m 58 years old, so not quite retirement age, and I still have a passion for the business,” said Larson, who has led the bank for nearly a quarter-century. “A small number of retiring CEOs transition to executive chair, but you’re seeing it more and more.”

Amazon’s Jeff Bezos is one example, he said. He also has learned of several recent examples in community banking.

“For me, the way I proposed to the board that we structure the executive chairman role – and I imagine every company is different – revolves around areas I can still add value to the bank. One example is partnering with the CEO on ‘one-way-door’ decisions,” he said.

Those are the decisions “you really can’t unwind,” he explained. “It’s a 100 percent commitment.”

Mergers and acquisitions, which he will oversee, are a clear example.

“And I’ll be a link between the bank and the owners group, shepherding culture and mission, my relationships with regulatory agencies and associations and professional partnership and customers,” he continued.

“And I’ll act as a spokesman and representative of the bank along with others in leadership and be mentoring my successor.”

His successor, Don Morgan, was chosen through a deliberate process that began with Starion enlisting the help of multiple advisers, including a consultant the family met through their involvement in the Prairie Family Business Association.

“We’ve talked about transition and succession for a long time and really focused on it the last five years,” Larson said.

“Don has been with the bank for 10 years in senior positions, most recently as president since 2020, and we’ve had a chance to see and understand his work and see that he is a good cultural fit for the organization.”

Before a decision was made, Morgan interviewed multiple times both with board members and family-owners.

“I’m the only family member working in the business, but my siblings have ownership interest, so this was an opportunity to engage the family in the process,” Larson said. “He had a unique vision statement for the family and for the board, and I think my family really appreciated the chance to weigh in and be involved in the interview. Ultimately, it was the board’s decision to promote Don.”

For Shelley Larson, who also serves on the board, “it’s been a wonderful transition,” she said. “Craig made sure everyone was part of the process, even our third generation, and we could bring difficult questions and do multiple interviews.”

At her suggestion, the Larsons and a board member who was leading the search process and his wife took Morgan and his wife to dinner to talk through the bigger picture of being CEO.

“Shelley really brought the perspective that Don’s whole family would be affected. It’s a big commitment,” Larson said. “So we spent a couple hours sharing with them. Our director also has been a CEO for 20-plus years, so we all sat down and talked about whether the family was ready for this and how we’d had to rearrange our life.”

While Morgan is not a member of the Larson family, that’s not unique in the bank’s history. Larson’s father, Frank, is a lawyer who bought his first bank at age 40 and had a variety of business dealings.

“My father was never an active manager, always an owner and chairman of the board, and we were led by nonfamily presidents for our first 28 years,” he said. “So we’re very comfortable having a nonfamily member run the bank. We’re family-owned and determined to be professionally managed.”

At nearly 93, Frank “is still sharp as a whip and very excited for the transition,” Larson said. “He really is happy for Don and for me and the organization.”

While his parents “were very progressive in estate planning,” the family “wasn’t engaging a lot in family business activities” in the late 1990s and early 2000s. Larson was looking to change that and not sure how when he received a fateful phone call.

“It was the executive director of the Prairie Family Business Association who told me the board had decided to expand out of South Dakota and that North Dakota was the natural place to go,” he said.

“She had heard my name as a good family business person, and it was sort of serendipitous because I was wondering where to find help and had no idea there was a group in Sioux Falls. So it was a bit of an answer to a prayer, and I jumped in 100 percent.”

He began attending association events, joined the board and ultimately served as chair.

“Honestly, a lot of the things we’re doing in our bank are things we were exposed to through the Prairie Family Business Association,” he said. “We’ve seen it grow in North Dakota, and it was fun to be a pioneer in this. I’ve done my best to encourage and invite others to join.”

Larson has been a member of a peer group for years and is just transitioning off as his role changes, “but it’s been really good, and I’ve got lifelong friends I made there,” he said.

Shelley Larson has joined him at association events, and “we’ve learned a lot and implemented a lot,” she said. “As an in-law, I was always impressed because sometimes you feel a little awkward at those things when you’ve married in, and when you go to Prairie Family Business, you find out you have a role, and I’m not alone in the feelings I’ve had. It’s just been a godsend for us as a family.”

In return, the Larson family has been a powerful example for others, said Stephanie Larscheid, executive director of the Prairie Family Business Association.

“They are leaders in so many ways,” she said. “Not only have Craig and Shelley been pivotal to growing our family business relationships in North Dakota, but they lead by example in terms of best practices and governance. We’re excited to watch them enter their third generation of ownership and be a part of the next generation’s family business journey. We know that they’ve created an outstanding foundation for future success.” 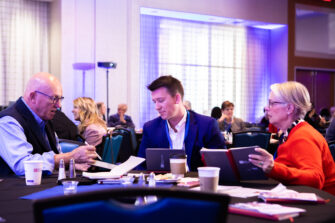 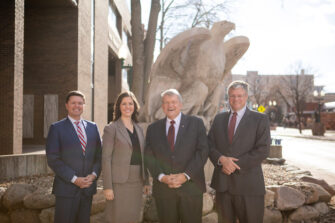