If you’re not familiar with the business, your first guess likely is that Auto Body Specialties is a place to take your vehicle for body work.

“It’s common for people to think we’re a body shop instead of a body shop supplier, but we’re 100 percent wholesale,” president Jim Roddel said. “We sell to body shops, and over the years we’ve expanded our services as we added locations.”

Roddel’s parents, Harley and Sallie, founded the business as Service Parts Co. in downtown Sioux Falls in 1950. It has expanded to six locations and is now in its third generation.

“I’m the youngest of five siblings and the last of the second generation involved in the business, but all of us have worked in and helped lead and grow it,” he said.

Harley Roddel initially worked for another company in the 1940s as a salesman with a dedicated territory.

“But he could see the writing on the wall that it wasn’t going to be around a long time, so he started putting together his own network and vendors,” Roddel said. “He decided he’d leave and start his own company, and he and Mom did so with just a few dollars in their pocket, but he had the relationships, and that’s what it was all about.”

“He came into the family business, and they made a directional change and decided to focus solely on the auto body side, which was a great vision,” Roddel said. “It really propelled our company going forward.”

In 1978, the first branch location was opened in Mitchell, and the company name changed to better reflect the core business.

The five siblings purchased ABS in the late 1980s and went on to add locations in Minnesota and throughout South Dakota. Its Sioux Falls headquarters and warehouse were built at 4710 N. Westport Ave. in 2003 and expanded in 2016.

The transition to the second generation was somewhat sudden, Roddel said.

“They called the five of us over for a meeting – we were all working in the company – and said they had been working with their attorney, and they laid out the ground rules of us taking over the business, and that was really the first we know how it was going to go,” he said. “The transition was very quick. They wanted to retire and wanted us to take over, and from that day forward, we started learning the ins and outs of what it means to be in family business ownership.”

Despite the fast shift, there was a strong foundation, he added.

“Mom and Dad had laid out a great foundation. and it was pretty easy and painless buying out the business,” he said. “But Dad knew we had some fresh ideas, and we ran with it and were allowed to incorporate those ideas and take it to the next level.”

Today, “conservatively, we have over 1,000 customers throughout our geography,” Roddel said.

The company supplies auto body crash parts, exterior parts and automotive glass – that’s about one-third of the business – and is a platinum distributor of PPG Paints.

“We were an early adopter of their light industrial line of coatings and made a commitment to go all-in selling exclusively their paint supplies and products to our industrial and commercial accounts.”

When the third generation of the family began to work at ABS, it was a more intentional transition.

Mary Knetsch, Ron’s daughter and Jim’s niece, is director of purchasing and began at the company 16 years ago after playing college basketball with a plan to coach.

“I found out fast that’s not what I was meant to do,” she said. “So I came back to Sioux Falls in 2006 and talked with my dad about getting a job at Auto Body Specialties, and I interviewed with my uncle Jim and two of my aunts and started in the warehouse. My dad told me, ‘You’re going to have to earn everybody’s respect and work twice as hard because you’re an owner’s kid,’ so I came up working various roles.”

When Ron retired in 2011, his daughter took over purchasing of PPG Paints, “and I found my niche in the company,” she said. Knetsch was named director of purchasing in 2019.

“It was a very good experience to work with my dad for two or three years and experience on a different level than as my dad,” she said.

“And then seeing my uncle and aunts in a different light as business owners in South Dakota and what they did for customers and employees. It’s a great place to work, and it’s nice to work with family because whether you’re struggling or on a high note they’re always there to pick you up or set you straight if you’re floating in the wrong direction.”

Her cousin and Jim’s daughter, Jenna Roddel-McPherson, serves as director of accounting and administration, and joined the business in 2010 after working in banking since high school.

“It gave me an opportunity to learn the financial institution’s way of doing things and gain a better understanding and appreciation of the banking industry,” she said. “And then I had the background in 2010 when the bank was going through a software upgrade at the same time as ABS, so my dad and I were swapping stories, and at the same time, I was working extremely long hours, and as a single parent I was at a point where I needed to figure something out.”

Her dad let her know there was going to be a job opening at ABS – a bookkeeping position. “He said, ‘You’re the most qualified person I know.’ So I interviewed with my three aunts and was offered the job,” Roddel-McPherson said.

“I got to learn the accounts payable and accounts receivable side, and then when our credit manager unfortunately passed away, I moved into that position and had to learn on the fly, but from there I’ve grown even more.”

The youngest family member in the business, Abby Johnson-Youngquist, is Jim’s niece, and “both my parents were involved in the company for 40 years,” she said. “My mom was the vice president and in purchasing, and my dad was the operations manager, so I have close ties to the company, and a lot of times growing up, I’d come in and help where I could.”

She earned a degree in fine art from USD while working part time at ABS, and “when I came on full time in 2015, I sat down with my aunts and discussed coming on full time and the responsibilities and what that meant,” she said. “The idea of working hard so nobody thinks this was handed to you was very important.”

She began in different departments, helped out her cousins, did deliveries and eventually found a love of marketing. She’s now director of marketing, communications and IT.

“In 2019, when my parents retired, it was a big transition for me because I looked up to them, so I was very excited to step into a role my mom had as an owner and get to continue that,” she said. “And my dad’s job included IT, so a portion of his job landed on my desk, and I’ve loved getting to do that and improve our cybersecurity, and it’s just an honor and privilege to work with your family. I love getting to learn from my cousins and uncle just like I loved working with my mom and dad.”

Roddel’s son, Jordan, also works in the business on the buying team but has chosen not to buy into ownership.

“Anywhere from one to five days a week, I have the opportunity to go to lunch with Jenna and Jordan, and many times we talk about family, but it rolls right into talking about business because we’re all immersed in it so much,” Roddel said. “As an extended family, we’ve talked about needing to do more social things because we don’t get together as a big family unit so much.”

ABS also offers employee ownership through an ESOP, which began when Ron retired in 2011. There are 85 team members across six locations, with about half based at the Sioux Falls headquarters.

“Our ESOP has grown to about one-third of our total shareholder ownership, and we’ve actively promoting it,” Roddel said.

A transition to ownership with the third generation of family included working with a consultant who ultimately became the company’s CFO.

“We laid out a whole transition to buy out my last two sisters in the business and move forward with three of the third generation who had an interest in ownership,” he said. “There’s still a lot to learn, but it wasn’t like it was dropped in their laps overnight. And we decided the Prairie Family Business Association could be instrumental in helping us transition and learn things I hadn’t benefited from when we took over.”

ABS recently attended its first annual conference for the association and is becoming involved in its programming.

“We’ve really enjoyed getting to know the Roddel family,” said Stephanie Larscheid, executive director of the Prairie Family Business Association. “There’s so much growth and learning that occurs in what’s known as the ‘cousin cohort’ as the third generation begins working together, and we’re excited to give them the resources to navigate the transition and watch them continue to expand.”

Roddel has become part of a leading generation affinity peer group, “so it’s peers nearly the end of our business life thinking about how to transition to the next generation,” he said. “And Jenna and Abby are part of transitioning peer groups. I’ve learned many great things being part of similar groups over the years where you can lean on each other and learn from others’ experiences, so I’m looking forward to this with Prairie Family because it’s not industry-specific but geared to family businesses.”

“It was really, really good information,” she said. “One of the speakers talked about how culture is key to success, which was just a really good motivational speech, and some of the other speakers also were very good with helping you improve your business and culture.”

All three cousins said they look forward to building relationships through the association.

“I think networking is huge,” Knetsch said. “Finding someone you can connect with and bounce ideas off and see what works and hasn’t worked in business is so valuable. If you surround yourself with great people, you’ll have a better chance of growing your business.”

The family has Sioux Falls roots and plans to stay, Roddel added.

“We love Sioux Falls, we love where we’re at in South Dakota and the Midwest, and I think those values run very true through our business and work ethic,” he said. “We’re very active in our communities, and in talking with friends in other parts of the country, I wouldn’t trade where we live and work for anywhere.” 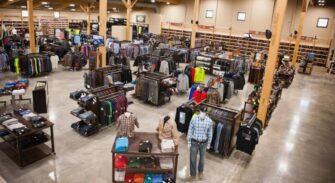