If life had taken a different path, Larry Canfield could have found himself – literally – digging into business ownership.

“We were ditch diggers,” he said. “We did water and sewer and trenching, underground work, in Sioux Falls.”

His father, Robert, and uncle, Claude, were partners in Canfield Bros., which began after Robert returned from World War II with a background in heavy equipment from working with artillery.

Larry spent summers working in the business as a teenager. 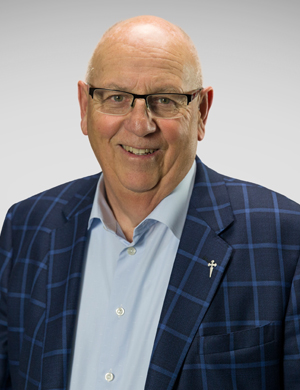 “I just got in the truck and put my boots on and started digging,” he said. “That’s where I was headed.”

But when he returned to Sioux Falls in his early 20s after serving his own time in the Army, he and his father worked together for only about a year before Robert died from cancer.

“He was the original entrepreneur, he was my mentor, and all of a sudden I woke up one day, and he was gone,” Larry said.

With little time and no transition, the family’s ownership split. Claude continued to run the trenching business, and Larry partnered with his friend Tom Walsh to buy a liquor store that Robert and Claude had owned.

Larry and Tom ran Walfield Liquors for several years while juggling other jobs and while Larry earned his degree at Dakota State University. In 1976, they sold the liquor store, and Larry started Scan Am Furniture with another friend, Verlyn Larson.

“The concept was Scandinavian and American furniture along with contract business,” Larry said. “So he and I were the founders of what we have today. I mentored under him, and we put a business plan together.”

About the same time, he saw the chance to bid a furniture job for a savings and loan, and a name caught his eye: Haworth.

Larry reached out to the Michigan-based furniture designer and manufacturer.

“And within 30 days, they came to town and said, ‘We want you to be our dealer.’ They’re family-owned, and their values are very much like ours,” he said. “So we had the first work station as a mock-up on our showroom floor. Nobody had ever done one.”

That was one milestone that helped launch what would become Canfield Business Interiors. The other was in the early 1980s, when Citibank arrived in Sioux Falls. 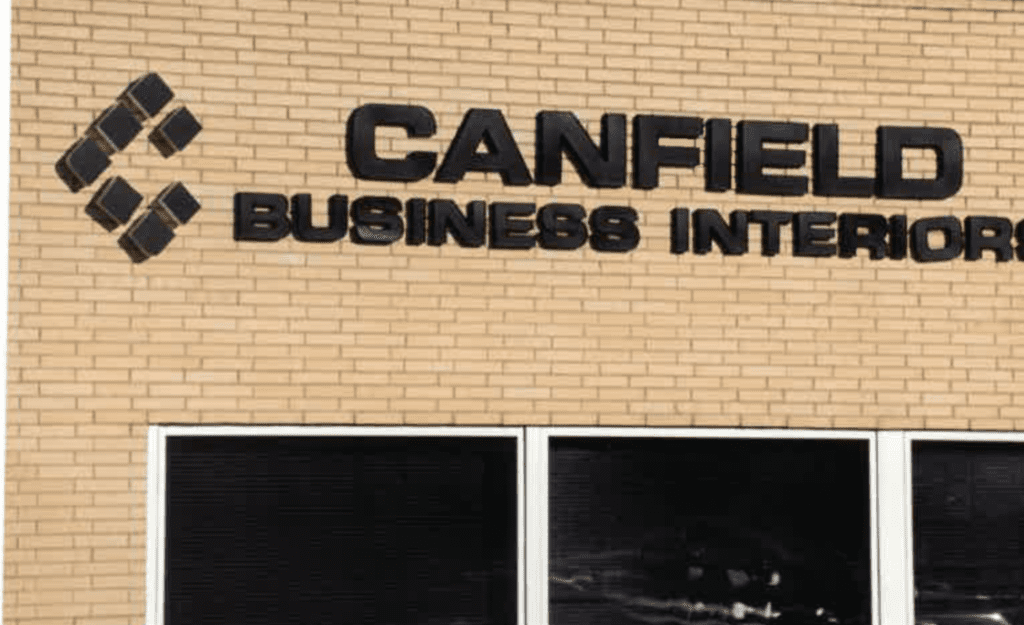 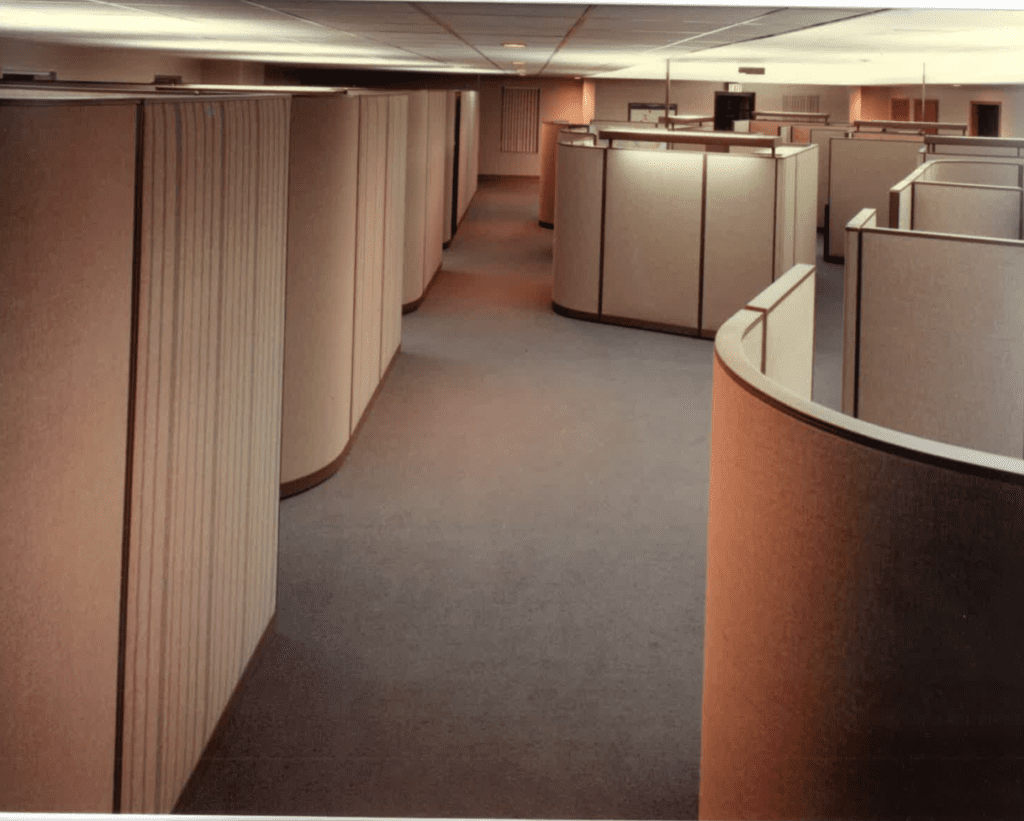 As businesses moved away from individual offices and started bringing in panels and desks for what would come to be known as cubicle-style offices, Canfield’s customer base took off. Larry bought out his partner, and the business focused on commercial clients. 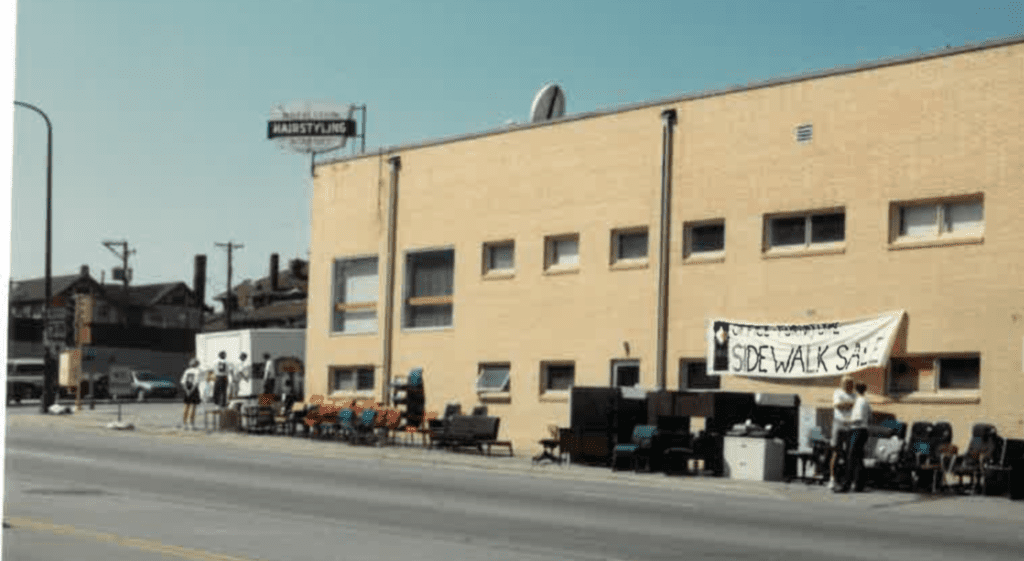 Canfield Business Interiors has been among Haworth’s top 30 dealers nationwide for more than a decade.

“We’ve done projects in New York, Los Angeles, the British Virgin Islands and, of course, all throughout Sioux Falls and the surrounding area,” Larry said. “We’ve worked closely with Wells Fargo, Sanford Health System, Profile by Sanford and Sidecar Blocks Brands. So wherever they want to go, we have a system and understand how to deliver that in a broad geography.”

Larry’s sons, Aaron and Dan, grew up in the business.

“Some of my earliest memories are cleaning the showroom floor, coming in on Saturdays and doodling while hanging out with my dad in the office,” Aaron said. “When I got older, I would install office furniture in the summer as a job.”

He inherited the family entrepreneurship gene but wasn’t quite sure where it would lead him. 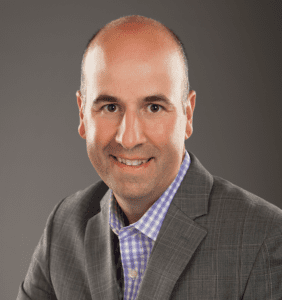 “I always knew I wanted to be in the family business,” he said. “So I had a dream of starting a business with Larry and the rest of the family.”

The family rule required five years of working in another business first.

“When my brother and I were still in college, we started having discussions about what the game plan was if we wanted to enter,” Aaron said. “So I was doing my five-year stint working for someone else and called up Larry and told him I had an idea for a business I wanted to start.”

They met for lunch, and Aaron told his dad about PODS, a moving and storage franchise he wanted to bring to Sioux Falls.

Larry asked him to come back to the office.

“When we got there, he reached out for a brochure on his credenza and threw it on his desk,” Aaron said.

“And it was a PODS Moving & Storage brochure. He’d been thinking of starting the exact same business.” 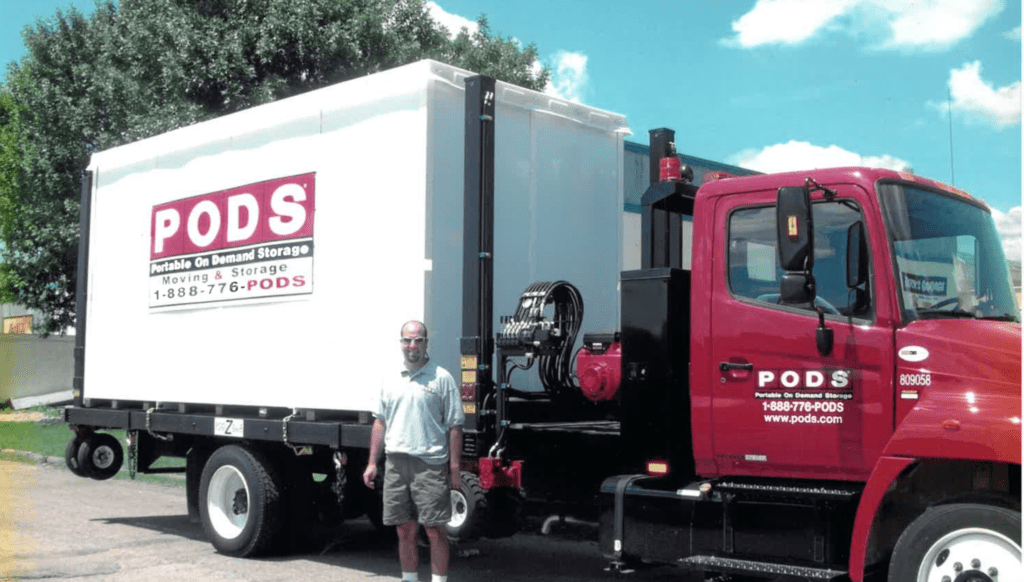 “It was probably the worst time in the moving and storage business, so I got the full brunt of what it’s like to experience the highs and lows of a business,” he said. “But Larry said it takes about five to 10 years for anybody to really know what you do and how you do it, and he was spot on. It took us seven years to really make it work.”

She is a CPA who had helped Canfield with bookkeeping, so she asked her father-in-law to be a reference for one of her job applications. He offered her a job instead. 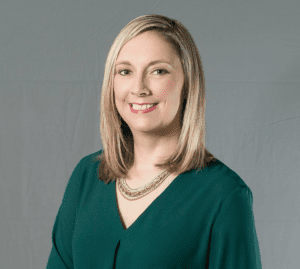 That was 11 years ago. Her role now has evolved to president and CFO of Canfield Business Interiors.

“It’s a blessing that Larry is still very engaged in the business, and we’re still learning,” she said. “Every day we get to work together multigenerationally makes us stronger.”

Like any family business, the Canfields have gone through tougher times personally that led to new perspectives on the business. A few years ago, when multiple family members experienced health struggles, they became connected to advisers through the Prairie Family Business Association.

“We knew we needed to talk to someone,” Stephanie said. “So we started with a transition plan, and now we have a plan, but we’re still working on transitioning on a daily basis. And our advisers have been so helpful in working through the complicated dynamics to get there. We know that neither Aaron or I or any one employee will replace Larry. But it’s working as a team with our key employees.”

Aaron also has found value in a peer group he joined through the Prairie Family Business Association.

“I love the people in my group and how we have similar situations,” he said. “It’s a place to go when problems occur or good things occur and a way to connect with people who understand the pros and cons of family business.”

The next generation’s energy also has helped the business, Larry said. While he came of age in the era of cubicles and open floor plans, office design is evolving now in other ways based around collaboration and flexible work options. 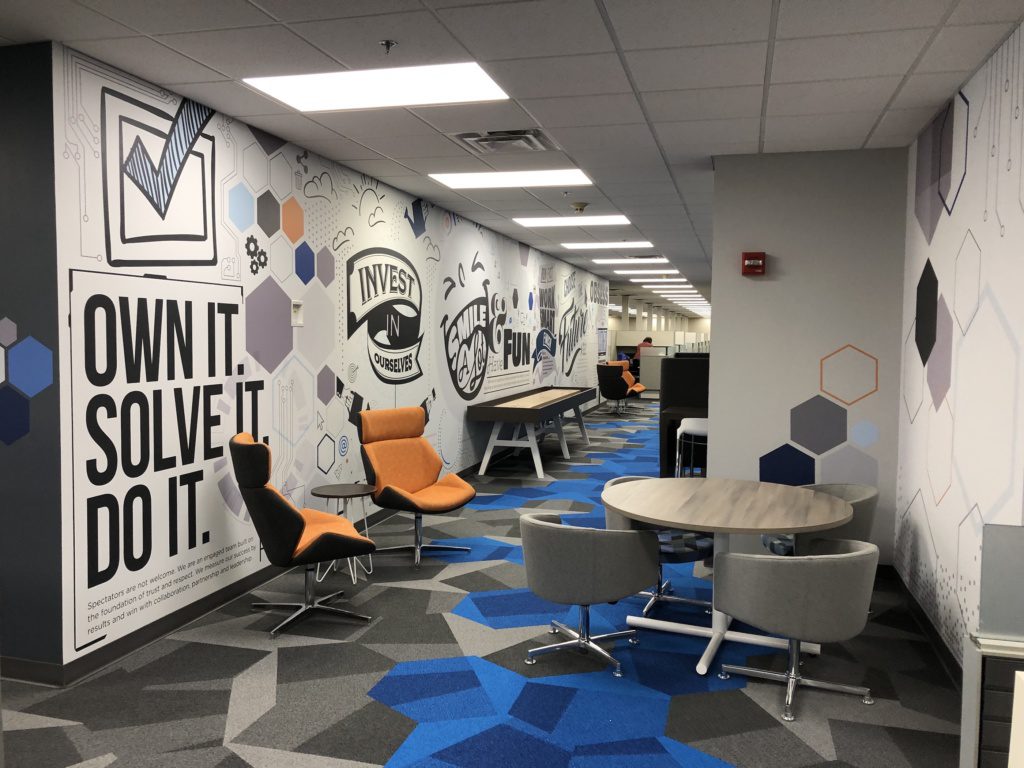 “Stephanie refers to us as a 40-year-old startup, and we look at that as being extremely positive,” he said. “And our business vendors see that as extremely positive because we get the legacy experience combined with the youth and energy of the new.”

And don’t forget their spouses, he added.

“We look at this truly as a business with family members in it, but our resources are those other three spouses: Mary; Stephanie’s husband, Dan; and Aaron’s wife, Kristin. We have some great resources as spouses.” 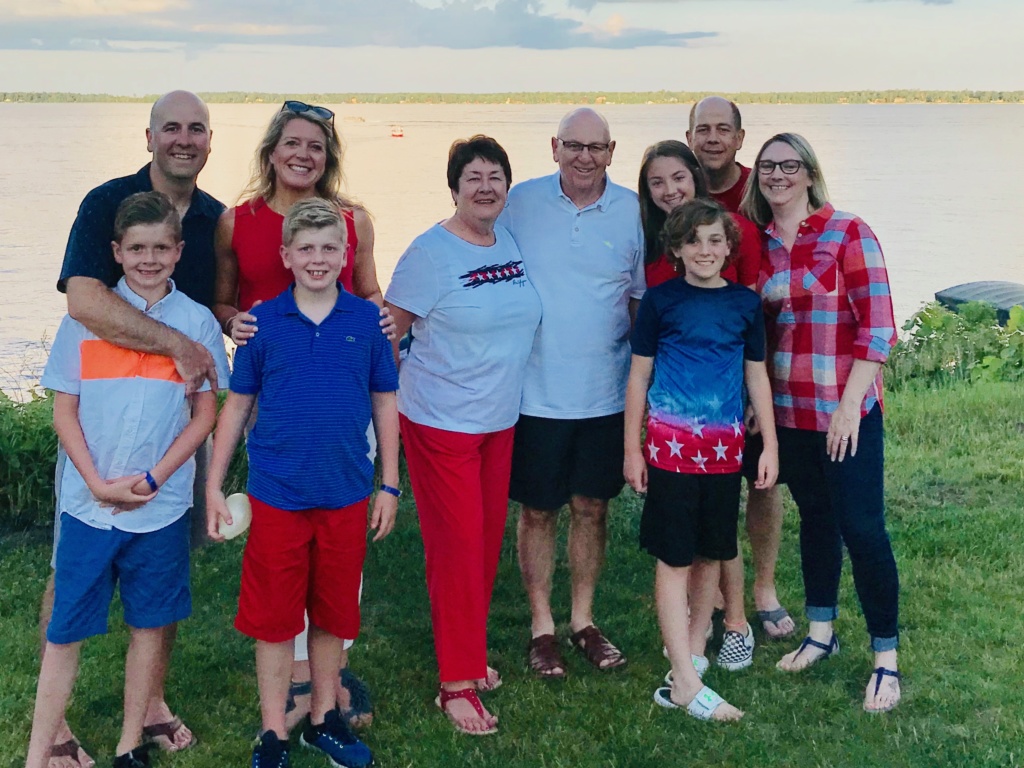 There’s also already an eye toward the next generation.

“My 15-year-old just had a meeting with Larry and came back and said, ‘I think I just had a business meeting with Grandpa.’ But it was talking about college and about sharing values,” Stephanie said. “So it continues to the next generation.”

While there’s no timeline set for transitioning further, Larry said his biggest goal is to continue instilling the values that form the foundation of the business.

“We work hard on it. When we get together as a family, we say a family prayer,” he said. “It’s my belief and faith and values – those are the right and truthful things – that I hope I can continue to pass on.”

The Prairie Family Business Association is an outreach center of the USD Beacom School of Business. 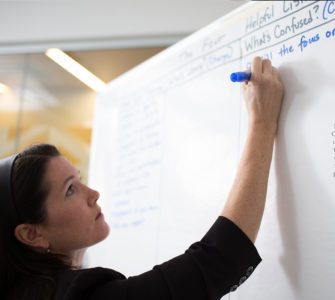